What does the unsightly graffiti you see on the side of the road have to do with our man Elvis? You might be surprised what beauty can come from ugliness.

Just beside the A44 near Eisteddfa Gurig, about 10 miles outside Aberystwyth in mid Wales, you’ll see it. In a dip in the road is a well known landmark that has been there for 50+ years. Bright white letters jump out at you, can’t miss it – but then why would you want to?

The ELVIS rock has been there since 1962.

Preceding a Montgomeryshire by-election held on May 15, 1962, two men in balaclavas (like a ski mask) decided to demonstrate their support for the Plaid Cymru candidate, Islwyn Ffowc Elis, by painting his surname on a rock beside the road. John Hefin, from Borth, and his friend David Meredith, from Llanuwchllyn, near Bala, were the culprits doing the deed – with one minor problem …. they misspelled Elis.

“We wrote Elis in red and surrounded it in green – the colours of Plaid Cymru and Wales. You could see the sign for at least a mile away in the daylight.

“Mr Meredith said of the pair’s antics: “We saw this wonderful rock. It’s not often that a rock presents itself in such a way and we decided to paint Elis on it.

“We went back some days later to admire our work and damnation, someone had changed Elis into Elvis.

“We never mentioned it to Islwyn Ffowc Elis, but I’m sure he would have been pleased to have been associated with Elvis.”

The rock became a recognizable marker for anyone traveling in mid Wales. It’s changed from time to time through the years, added and taken away but always returned to it’s recognizable and precious roots.

Local artist Wynne Melville Jones captured the landscape icon and a limited edition print of the original painting was presented to the Elvis Presley archive in 2016 according to BBC News. Has anyone seen it there at Graceland – or even better, seen the real thing in Wales? 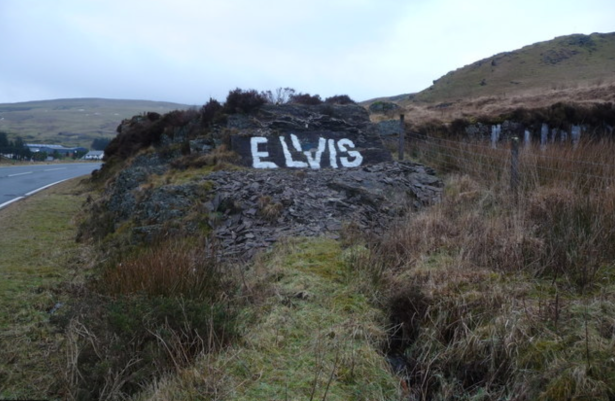 It’s a WIN WIN! It won’t cost you any extra to shop through our Amazon affiliate links below!

Elvis Ignited: The Rise of an Icon in Florida

Visit our friends TL and Dan at Blue Suede Connection